International airline Qatar Airways invited guests to a special VIP event to launch its new route between Doah in Quatar and Kampala in Uganda. The Event was an exclusive gathering of Qatar's top clients and guests and featured International artists and much more.

Back to Case Studies

Qatar Airways was a small, regional carrier servicing a handful of routes when it began operations in 1994. It was relaunched in 1997 under Qatari Emir Hamad bin Khalifa Al-Thani. He outlined a vision for turning Qatar Airways into a leading international airline with the highest standards of service and excellence.

Qatar Airways, is the state-owned flag carrier of Qatar. Headquartered in the Qatar Airways Tower in Doha, it operates a hub-and-spoke network, linking over 100 international destinations from its base in Doha, using a fleet of over 100 aircraft. Qatar Airways operates services across Africa, Central Asia, Europe, Far East, South Asia, Middle East, North America, South America and Oceania, and was named Airline of the Year 2011 at the Skytrax World Airline Awards 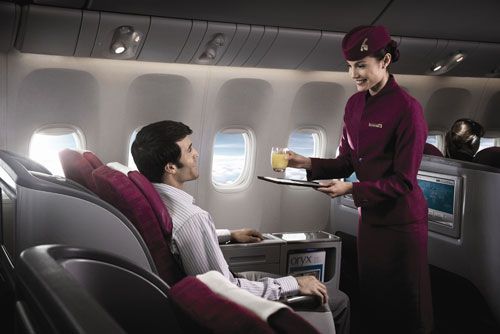 International airline Qatar Airways wanted to host a special VIP event to coincide with the launching of its new route between Doha in Qatar and Kampala, Uganda. The event was an exclusive gathering of Qatar's top clients and guest and the airline wanted to make it a memorable experience for all who attended. AMW was able to add a classy touch to this private event by inviting a top International superstar which amp the event's marketing efforts significantly.

Uganda is known as the Pearl of Africa for its abundant wildlife, natural lush green scenery and rich culture. From eco tours, white-water rafting, hiking, safaris and the country’s most famous attraction – the elusive and treasured mountain gorilla – Uganda has plenty to offer for leisure visitors.

Our teamed reviewed all the event details and created a list of suitable talent options for the engagement. We worked closely with Qatar Airways to find the best fit and quickly confirmed International R&B singer, Kenny Lattimore.

The Qatar Airways event received major media coverage from newspapers and other publications. Qatar Airways new route was well received by the public and is widely used by happy travelers. Kenny Lattimore has established himself as a soulful song stylist of the first order receiving the NAACP Image Award for Best New Artist, and nominations for the Grammy, Soul Train and Stellar Awards.

We identify areas that may need improvement.

We develop a custom project strategy.

We oversee projects until successful completion.

We review results and make adjustments.

Want to work with us?​