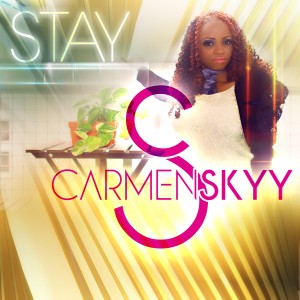 January 28, 2014 – Los Angeles, CA  – Miami native Carmen Skyy has released her latest single entitled “Stay”. The new track is an upbeat electronic production that includes traces of pop and hip-hop. Her new track will debut just in time to warm up electronic music fans prior to the 2014 Winter Music Conference (WMC) in Miami.

“Stay” is the latest single following her popular hit “I Dream About You”, a well-received effort that was released this past November. Produced by Elliot Waite, the new single unveils Carmen’s artistic style and collaborative spark. Some of Waite’s past work includes productions for Def Edge and Lel Brothas among others.

Carmen Skyy is a notable rising star in the electronic genre. She blends soulful vocals with melodic dance tunes that can capture a wide commercial audience. The new single was included in the WMC’s 2014 compilation album and will be delivered to the hands of every WMC delegate. “This has to be one of my favorites  “I had too much fun recording’ and writing tracks,” says Carmen Skyy about the new single. “…I call it my xplosive joint!”

A lyrically and vocally talented artist, Carmen Skyy is also a crafty emcee. Her 2013 mix tape “Backstage” highlights her diversity as an artist who has the ability to successfully cross genres.

The single is now available for purchase on iTunes.

Born to a Haitian father and a Venezuelan mother, Carmen’s cultural diversity is a critical element in the music she creates.  Carmen cites wide-ranging musical influences such as Michael Jackson, Lauryn Hill and John Mayer, which certainly show through in her songwriting and pop sensibilities. Her songs have been played various radio stations. In addition, she has had music placed on soundtracks and media including the film “Brother’s Gonna Work It Out,” MTV’s “The Real World,” and a “Starburst Fruit Chews” radio commercial.

About Winter Music Conference
Winter Music Conference, in its 29th consecutive year, is one of the most publicized annual music gatherings in the world. A pivotal platform for the advancement of the industry, WMC attracts thousands of artists and music industry delegates from 70 countries and over 100,000 event attendees each year for a concentrated schedule of more than 500 events, parties, seminars and workshops.