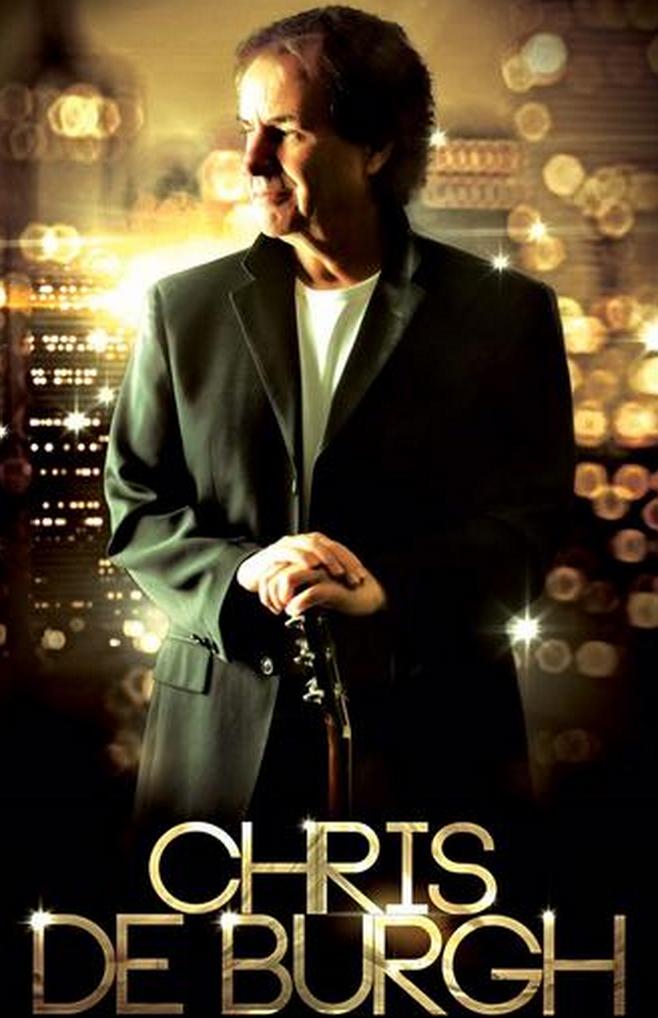 Los Angeles, CA – August 24, 2015 — One of the most memorable romantic ballads of all time, Chris De Burgh’s “The Lady In Red” has long been declared a timeless love song. In addition to its chart-topping success in the late 80s, the song was just one of many from the legendary singer/songwriter. In support of his latest album “The Hands of Man” and as part of the North American leg of his “Hands of Man Tour” De Burgh will be returning to California with his band this October for three nights of his best-loved hits and cuts from his new 20th studio album.

Presented by Noureen Entertainment and sponsored by Party Bravo! (www.partybravo.com) the first concert will kick off Thursday, October 15th in Cupertino, CA at the Flint Center, followed by performances on Friday, October 16th at the Bren Events Center in Irvine, CA and Sunday, October 18th at Nokia Theatre in Los Angeles. With a new album under his belt and many fans eagerly awaiting his return to the states, ‘Lady In Red’ Live in Concert is sure to be an nostalgic experience. An international music icon De Burgh has been especially active in Europe, Canada, Middle East over the last several years.

Join Chris De Burgh as he returns to the states after almost 20 years to perform classic hits like, “Don’t Pay the Ferryman”, “Spanish Train”, “Sailor”, “Natasha Dance” and “A Spaceman Came Traveling.” A continuation of his sold out 10-city Canadian tour, the California dates are De Burgh’s only US scheduled performances. One lucky fan will also win a chance to meet De Burgh backstage after his concert performances. To enter the contest visit the official tour Facebook page: www.facebook.com/Chris.de.Burgh.CA.Tour

With sales over 50 million albums worldwide, Chris de Burgh’s songs are staples on the radio. “The Lady In Red” to this day remains one of the most played songs on the planet. De Burgh’s other classic songs include: “Don’t Pay the Ferryman”, “Spanish Train”, “Sailor”, “Natasha Dance” and “A Spaceman Came Traveling.” Legendary singer/songwriter Chris de Burgh returns to California, for a night of his best-loved hits and live cuts from his brand new, 20th studio album: The Hands of Man.

Noureen Entertainment is a concert promoter that specializes in bringing top International artists to new audiences throughout the North American market. The artists promoted by Noureen Entertainment are well-established entertainers and performers with fans all over the globe. We focus on providing the best entertainment experiences possible by combining great talent with the best concert venues and production teams in the business. Official website: www.noureenentertainment.com