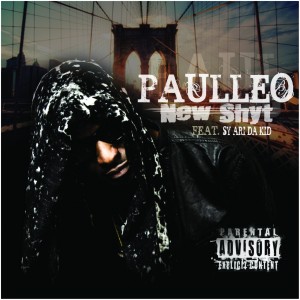 Tuesday, July 22, 2014 – Los Angeles – Known for his many accomplishments as an r&b and hip hop music producer, singer-songwriter Paulleo Davis has released the music video for his latest single, ”New Shyt.” The single debuted earlier this month and is currently available on iTunes. The new video is now available on Youtube.

Produced and written by the ASCAP Award-winning Paulleo and Grammy nominated Kief Brown, the new track also features a few bars from popular Atlanta rapper Sy Ari Da Kid. Shot in Paulleo’s extraordinary 15,000sqft home, “New Shyt” evolves around moving on to different things — from the style of music to how you are living; Notably reminding us that its time for something new.

Directed by CROOKED and edited by GT Films, the video captures the multi-talented musician and emerging r&b crooner as he fashions the modern elegance of playing the piano with his beautiful vocals and trendy hook.  In addition to the video, the “New Shyt” has plenty to offer both r&b and hip hop fans alike.

Early in his career Paulleo started his own production company, G.N.M Entertainment, which is an acronym for “The Game Needs Me”! He’s produced tracks for T.I., Young Dro and Yung LA while collaborating with The Beat Billionaires.  He’s performed alongside the late Whitney Houston, Diana Ross and has opened for many hip hop and r&b artists during the course of his career. Paulleo is currently putting the finish touches on his new album and plans to tour later this year in support of his new project.

Singer, songwriter, musician, producer, and composer. Born and raised in Brooklyn, New York. At the age of three, Paulleo Davis began singing in church, dancing and pop locking in the streets of Flatbush Ave. At the ripe age of seven, he won his first talent show. It was the glitter glove one and moonwalk on television that summer, inspiring Paulleo to know who and what he wanted to become, an Entertainer.

Emmanuel Lewis, also known in entertainment as “Webster” and childhood friend of Paulleo, afforded him the opportunity to speak to Michael Jackson. As a child, Paulleo often spoke to Michael Jackson about his future in the music business. The wise and prolific, King of pop, Michael Jackson asked Paulleo “What will set you apart from everyone else”. Paulleo thought about all his idols including Michael Jackson, Prince, the elusive Stevie Wonder, John P. Kee, and Eddie Murphy answering the King of Pop with one word “uniqueness”.

If you work just for money, you’ll never make it, but if you love what you’re doing and you always put the customer first, success will be yours.