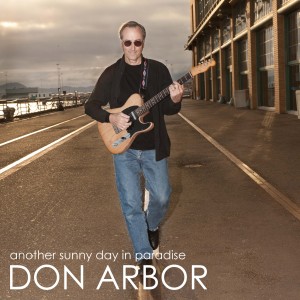 October 18, 2013 – Los Angeles – Singer/songwriter and musician Don Arbor has released the latest single, “Another Sunny Day in Paradise” from his third studio album. “Sunny Day” is one of 16 original tracks and 4 classic covers on the two-disc set entitled “Man on a Mission” which was released this summer. Both the single and album are available on CD Baby and iTunes.

“Another Sunny Day in Paradise” captures the beat and melody of a summer day when everything goes right. Since July, the single spent the summer climbing the FMQB AC 40 Chart, and it continues to gain momentum throughout the country. This week, “Sunny Day” found a spot on the very hip, Mediabase “Cool New Music List!”

Written and performed by Don Arbor, the song highlights his warm vocals, featuring a super-group of musicians — Stef Burns (from the Huey Lewis band) on lead guitar,  David K. Matthews (keyboards) and Tony Lindsay (harmony vocals), both from the Santana band, Marc Russo (from Tower of Power and the Doobies) on sax, and Peter Michael Escovedo on percussion.

“I love to see the smiles on the faces when they hear this song” says Don. “From the opening beat, the groove just brightens up your day”.

A multi-talented musician, Don is also an award-winning video artist. His music videos, “Salam Pax” and “If I Had a Son, He’d Look Like Trayvon” have taken on important social issues through compelling images and melodic songs, winning Best Music Video awards at the Berkeley Video and Film Festival in 2008 and 2012.

Don Arbor is a singer, songwriter and award-winning music video artist based in the San Francisco Bay area. Don’s new single, “Another Sunny Day in Paradise” captures the beat and melody of a summer day when everything feels so good, you just might be a little crazy! The single spent the summer climbing the FMQB AC 40 charts, rising to number 16 and winning fans around the country.

“Another Sunny Day in Paradise” is one of 16 original tracks on Don’s new two-disc album, “Man on a Mission” which was released May 2013. “Man on a Mission” includes a “Mostly Electric” set of pop, rock and blues, and a “Mostly Acoustic” set showcasing Don’s warm vocals, memorable tunes and moving lyrics.

The new CD features an extraordinary group of gifted musicians, including

Stef Burns, lead guitarist for Huey Lewis and the News; David K. Mathews, keyboardist with the Santana band; Kevin Hayes, drummer with Robert Cray; and Marc Russo, the gifted sax player with the Doobie Brothers and Tower of Power. Also featured on the acoustic tracks are several Grammy-nominated musicians, including Mike Marshall, mandolinist with Turtle Island Quartet; Barbara Higbie on violin and piano; and Quartet San Francisco on string arrangements.