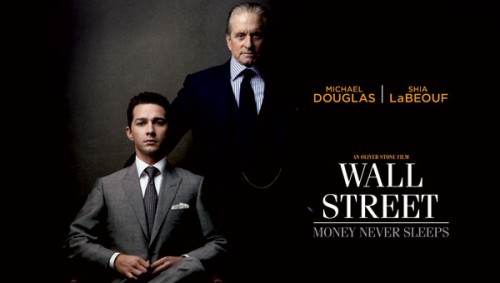 Director Oliver Stone went with a fitting selection of tracks by David Byrne for the newest sequel to Wallstreet. The majority of the songs come from Everything That Happens Will Happen Today, the former Talking Heads singer’s 2008 re-team with Brian Eno.

You can download the Wall Street: Money Never Sleeps soundtrack as mp3s here.

Michael Douglas is back in his Oscar-winning role as one of the screen’s most notorious villains, Gordon Gekko. Emerging from a lengthy prison stint, Gekko finds himself on the outside of a world he once dominated. Looking to repair his damaged relationship with his daughter Winnie, Gekko forms an alliance with her fiance Jacob (Shia LaBeouf). But can Jacob and Winnie really trust the ex-financial titan, whose relentless efforts to redefine himself in a different era have unexpected consequences. Watch trailer: www.wallstreetmoneyneversleeps.com